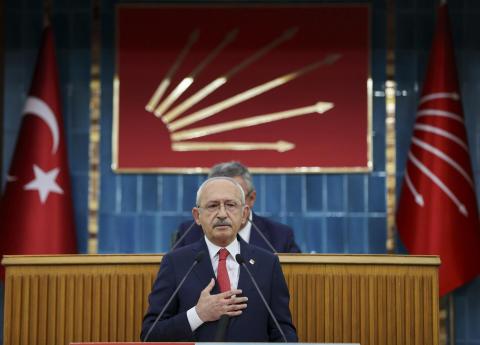 "Ömer Faruk Gergerlioğlu was hastily detained from his home because he shared a tweet and was taken to the police station. He had an angioplasty operation at the hospital and was put in prison," Kılıçdaroğlu said.

He recalled that the Constitutional Court took a decision unanimously that the rights of Gergerlioğlu were violated and demanded his release.

According to the relevant article of the constitution, the decisions of the Constitutional Court are published immediately in the Official Gazette, the CHP leader said, noting that the article says that the ruling binds the legislative, executive, judicial organs and administrative authorities.

"But he is still inside. Is this justice?" Kılıçdaroğlu asked.

The court on July 1 decided that Gergerlioğlu's "right to be elected and to engage in political activities" and "the right to personal freedom and security" were violated in line with article 67 of the constitution.

Gergerlioğlu was convicted in 2018 and sentenced to two years and six months in prison for "spreading terrorist propaganda" after he retweeted a 2016 news article about a call for peace by the illegal PKK group.

An appeals court confirmed the conviction, saying he was "owning" and "legitimizing" the PKK by sharing the link, which included a photograph of members of the group. On Feb. 17, the Turkish Parliament revoked his seat.