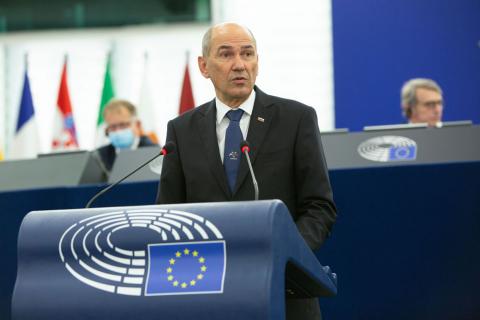 Strasbourg – PM Janez Janša said as he addressed the European Parliament on Tuesday he believed the time had come for the EU to start acting more strategically, including in the Western Balkans. Presenting the Slovenian EU presidency’s priorities, he said the first short-term priority was to do everything to prevent the fourth wave of the pandemic.

As everybody is wondering what lies ahead in the autumn, Janša considers it key to convince people to get vaccinated. “Every citizens should do everything to stop the pandemic,” he said, adding that ad hoc solutions should be replaced by sustainable structural measures.

He moreover highlighted resilience and recovery, the EU’s strategic autonomy, a Union of European way of life, the rule or law and equal standards for all and the right to freedom of speech as he presented the presidency’s priorities. He pointed to a credible and safe EU also able to ensure security and stability in its neighbourhood.

Janša urged everyone to present their views on the European future as part of Slovenia’s next priority – the Conference on the Future of Europe.

He is convinced that everyone should contribute to the debate even if their views are opposing, arguing that others should not teach Europeans about the European future.

Janša pointed to the respect for the rule of law saying equal standards should apply to all EU countries as a way of enhancing mutual trust.

It must be clear that in the end, it is an independent judicial body not a political body that takes the final decision, which makes the quality of judiciary particularly important, he said.

Janša also said a step forward should be made in the Western Balkans, arguing that if the EU was not active, somebody else with different interests would be.

The Slovenian presidency will also focus on the freedom and plurality of the media, Janša said. He announced that on the European Day of Remembrance of Victims of Totalitarian Regimes on 23 August, Slovenia would host an international conference.

European Commission President Ursula von der Leyen meanwhile stressed the role of values and the rule of law in her address to the European Parliament in Strasbourg.

She said the July EU summit showed how central they were, adding that ways of defending the EU’s values and financial interests would be debated at the plenary on Wednesday.

Noting Slovenia chaired the EU for the first time in 2008 as the first newcomer from the 2004 enlargement wave, von der Leyen recalled Janša’s words from that time that Slovenia was willing to do everything for the EU to be preserved, developed and strengthened.

She said this was still a noble mission which also entailed preserving diversity, media freedom and the rule of law and developing tools for the EU to be better prepared for future challenges.

Von der Leyen pointed to the role of trust, including in free media and independent courts, which she believes is also important for taxpayers, who finance post-pandemic recovery. She thus again urged Slovenia’s presidency to make efforts for a prompt conformation of national recovery and resilience plans.

Turning to the Europeans’ wish to end the pandemic, she said it was key to ensure effective vaccination, pledging the Commission will work together with the presidency to that effect. She concluded by saying “long live Europe”.