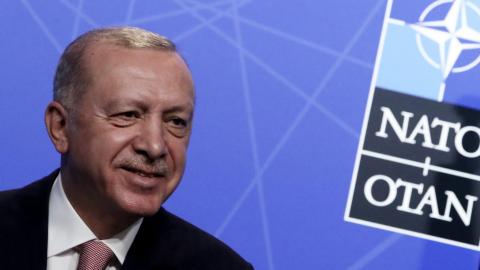 Ahmet Erdi Ozturk, a professor of politics and international relations at London Metropolitan University, told BIRN that Erdogan urgently needs to revitalise relations with the West.

"Erdogan is desperate for two main reasons. First, after [German Chancellor] Angela Merkel leaves, all the leaders with whom Erdogan had personal relations in the Western bloc will be gone. Personal relations between the leaders Erdogan prefers will be replaced by institutions. This will end Erdogan's strategy of bringing international crises into domestic politics to gain votes," Ozturk said.

According to Ozturk, the second reason is that Erdogan's electoral support is waning, as is the country's economic situation. "All polls suggest that he is losing support and that Turkey's poor economic shape cannot sustain worsening relations with countries that are its biggest trade partners, Therefore, Erdogan is again moving to the West," Ozturk added.

'Charm offensive' for economic reasons A man walks in front of closed shops at the Tahtakale bazaar during the lockdown in Istanbul, Turkey, 04 May 2021. Photo: EPA-EFE/ERDEM SAHIN

Even before the COVID-19 pandemic hit the world, the Turkish economy was in a crisis marked by high inflation, increasing unemployment and a relentless fall in the value of the lira.

Since the failed coup in mid-2016, the national currency has lost more than 220 per cent of its value against the euro. According to official figures, annual inflation is running at around 17 per cent and the unemployment rate was registered at nearly 14 per cent in May, 1 per cent point higher than the month before.

However, experts believe the real data on the Turkish economy are far worse, and that the government is...