Russia, Iran, Turkey to continue cooperation against ISIL in Syria 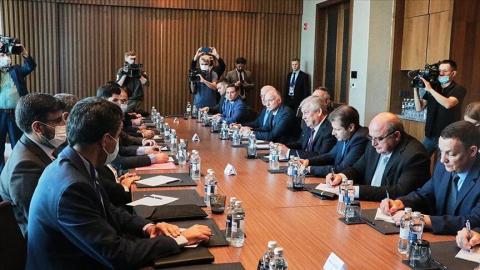 Russia, Turkey, and Iran on July 8 agreed to continue working together to combat terrorism and condemned the increasing terrorist activities in various parts of Syria, according to a joint statement by the representatives of the three guarantor countries released after the 16th international meeting on Syria in Astana format.

"Expressed their determination to continue working together to combat terrorism in all forms and manifestations and stand against separatist agendas aimed at undermining the sovereignty and territorial integrity of Syria as well as threatening the national security of neighboring countries," the document read.

"Condemned the increasing terrorist activities in various parts of Syria which result in loss of innocent lives including the attacks targeting civilian facilities," the representatives of the three countries said in the joint statement.

Russia, Iran, and Turkey also agreed to continue their cooperation to ultimately eliminate the terrorist groups Jabhat al-Nusra/ Hayat Tahrir al-Sham [all of them outlawed in Russia] and all other individuals, groups, undertakings, and entities associated with Al-Qaeda [outlawed in Russia] or the ISIL, and other terrorist groups, as designated by the U.N. Security Council, while "ensuring the protection of civilians and civilian infrastructure in accordance with international humanitarian law."

"Expressed serious concern with the increased presence and terrorist activity of Hayat Tahrir al-Sham and other affiliated terrorist groups as designated by the U.N. Security Council that pose a threat to civilians inside and outside the Idlib de-escalation area," the document said.