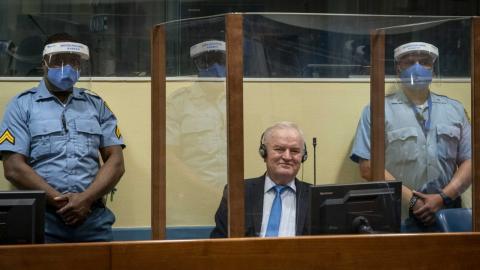 The decision by the UN court in The Hague last month to uphold the life sentence handed down to former Bosnian Serb military chief Ratko Mladic takes the number of life terms imposed for involvement in the Srebrenica genocide to five.

Among the convicts who was sentenced to life is wartime Bosnian Serb political leader Radovan Karadzic, who in May this year was sent to serve his sentence at a prison on Britain's Isle of Wight.

Besides them, a total of 48 individuals have been sentenced to more than 700 years in prison by courts in The Hague, Sarajevo and Belgrade for involvement in crimes related to the Srebrenica massacres.

However, over the past year since the last anniversary commemoration of the genocide on July 11, 2020, the Bosnian state court has only handed down one first-instance verdict, convicting Srecko Acimovic, a former commander of the Second Battalion of the Bosnian Serb Army's Zvornik Brigade, of aiding the Srebrenica crimes.

Acimovic was found guilty of assisting in the detention of Bosniak men who were held at a school building in the village of Rocevic in the Zvornik municipality, and their subsequent murders on the banks of the River Drina, near Kozluk. Appeals have been filed and the court is due to give its second-instance ruling in the case soon.

Four other first-instance trials for genocide and other crimes in the Srebrenica area are underway before the state court in Sarajevo, while there is one ongoing trial in Serbia - the trial of eight Bosnian...