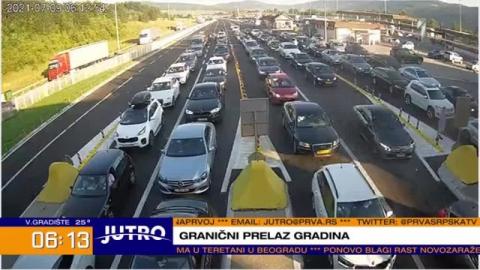 The busiest roads lead from Hungary and Croatia to Macedonia and Bulgaria.
Apart from highways, the intensity of traffic has also increased on the routes leading to Montenegro, AMSS announced earlier.
Passengers wait for two hours to enter Serbia from Hungary, at the Horgos crossing. The passangers are waiting to enter Montenegro about half an hour, at Gostun border crossing.
There is a huge crowd at the "Batrovci" crossing, where the end of the car line is not in sight.
At Gradina towards Bulgaria, the waits are shorter, about 10 minutes. There are currently only a few vehicles in Presevo towards North Macedonia.
Larger crowds are expected during the day, because tourist workers claim that this weekend will be most popular for starting vacation.

Belgraders are still struggling with traffic jams in the capital.
As it was stated for B92.net from the Yellow Taxi, the biggest traffic jams are on the highway in the direction from "Lasta" to New Belgrade.
There were big crowds at the inclusions in the streets Kruevaka, Ustanika, Voje Ilia, Duanovaka, Southern boulevard...
There is also a road traffic collapse on the loop near Franchet d'EspèreyStreet due to a large influx of vehicles. The media previously stated that there was a chain collision near the Duanovac bridge. The police intervened, and the accident made the traffic in that part of Belgrade even more difficult.
It should be noted that the public company Roads of Serbia announced this morning that on the highway E-75, near the Razanj loop, in the direction of Nis-Belgrade, due to a traffic accident, the traffic is being conducted in an overtaking lane, due to the overturn of the trailer, unhooked from...