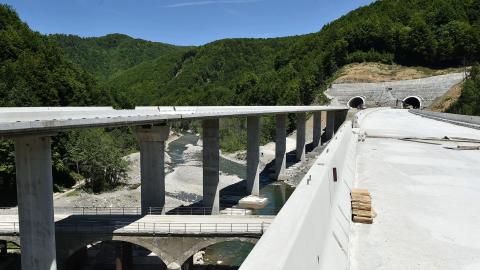 The first phase of Bar Boljare highway in Montenegro. Photo: Government of Montenegro

The Chinese loan for the first phase of Bar-Boljare highway has imposed a heavy burden on Montenegro's public finances.

Minister of Finance and Social Care Milojko Spajic said an arrangement was made with two unnamed US banks and one from France, converting the loan from US dollars to euros.

The ministry told BIRN on Friday said the arrangement means that the dollar loan Montenegro took out from China's Exim bank should be wholly converted into euros, while three other banks will take over any potential currency risk.

"The arrangement has practically reduced the interest rate on the debt to the Chinese Exim Bank from 2 per cent to 0.88 per cent," Spajic told the media. "On this basis, we will save 8 million euros a year," he added.

The Bar-Boljare stretch represents the Montenegrin leg of a highway that will run from its Adriatic coast to the Serbian capital, Belgrade. The Montenegrin leg is being built by the China Road and Bridge Corporation, CRBC. The first section is 85-per-cent financed by a $944 million loan from Exim Bank.

The Ministry of Finance and Social care warned that owing to the earlier non-conversion of the dollar debt into euros, Montenegro had lost some 109 million euros.

The US embassy in Montenegro praised the arrangement, saying it will further secure Montenegro's financial stability, while the US Special Representative for the Western Balkans, Matthew Palmer urged caution in business...