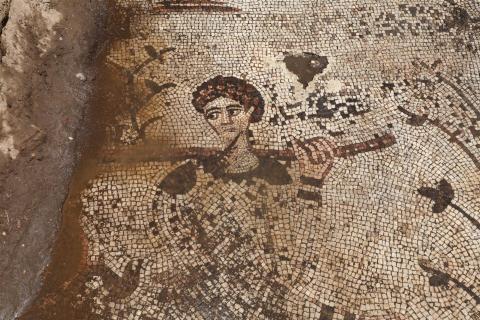 Byzantine-era mosaics found on the floor of a house during illegal excavations in the southeastern province of Gaziantep have been divided into 98 pieces after two years of work and started being moved to the Zeugma Mosaic Museum.

Gendarmerie teams carried out an operation upon the report of illegal excavations in a house in Yukarıbilen neighborhood of İslahiye district in 2019. The teams found 170 square meters of mosaic on the courtyard floor of the house.

The house was urgently taken under protection and the teams of the Provincial Directorate of Culture and Tourism started the rescue excavations in the house.

The works in the house have recently been finished. The mosaics, dating back to the 4th century and depicting human and various animal figures and hunting scenes, were decided to be moved to the Zeugma Museum in 98 pieces, each of which is 1.5 meters.

"These mosaics belong to a village in Islahiye district's Yukarıbilenler neighborhood. It is a privately owned area. We started rescue efforts here in 2020. This summer, we will carry all the mosaics to Gaziantep and present them to the visitors in the Byzantine-period hall in the Zeugma Mosaic Museum," Çomak said.

Çomak also stated that Gaziantep is a city of mosaics, adding, "This is the most undamaged mosaic from the 4th century B.C. in the Byzantine period. Multi-colored stones, glasses and natural stones were used in the mosaics."

Ayşe Ebru Çorbacı, deputy director of the Gaziantep Museum, who also worked as a restorer in the rescue excavations, said that they could not remove...