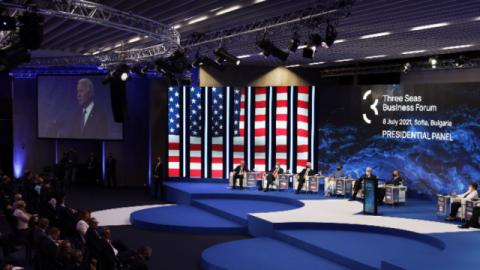 Speaking at a news conference on Day 2 of the Sixth Annual Summit of the Three Seas Initiative (3SI) hosted by Sofia, Bulgarian President Rumen Radev said that the Presidents and high-level representatives of the 12 participating states in 3SI have adopted a joint declaration.

An  official ceremony was also held on Friday on handover of the hosting of 3SI to the next host, Latvia.

Radev said that the joint declaration is an expression of the common political will to work for the speedy development of the countries in the 3SI region by improved transport, energy and infrastructure connectivity, by promoting public-private partnerships and new innovative models of development.

Radev said that in the two days of the summit and accompanying business forum, important meetings and discussions were held, and important agreements reached.

The Bulgarian head of State handed over the coordinating role of 3SI to its next host, Latvia.

Four Migrants Found Dead on Poland-Belarus Border
Greek ForMin Dendias: You can count on our full support in efforts to join Schengen, OECD