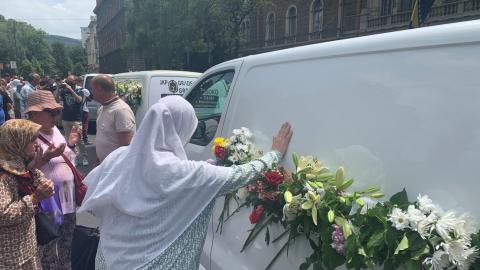 Hundreds of people came to pay their respects as a convoy carrying the remains of 19 victims arrived in Sarajevo before their burial at the Srebrenica Memorial Centre on the 26th anniversary of the Srebrenica genocide on June 11.

A ceremony organised in front of Bosnian presidency building was attended by the Bosniak and Croat members of the tripartite Bosnian presidency Sefik Dzaferovic and Zeljko Komsic, as well as the leader of the country's main Bosniak party, Bakir Izetbegovic, and Montenegrin Deputy Prime Minister Dritan Abazovic.

The youngest of the 19 Srebrenica victims who will be buried on Sunday at the annual collective funeral is Azmir Osmanovic, who was 16 when he was killed in July 1995, while the oldest is Husein Kurbasic, who was 63 years old when he died.

More than 7,000 people, mostly men and boys, were killed by Bosnian Serb forces and more than 40,000 women, children and elderly people were deported from Srebrenica in July 1995 during the genocide.