Slovenes Vote in Referendum on Changes to Water Law 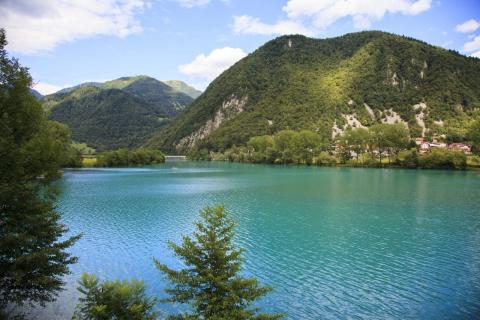 Opponents of changes to Slovenia's Water Law have just one day of campaigning before citizens cast their votes in a referendum.

"We have reached the end, the last day of the campaign against the harmful Water Law. We are here with different motives. Some have been involved in environmental protection all their lives, some have been disturbed by [the influence of] capital, but we are all connected by water," Nika Kovac, the director of the Institute 8th March, said on Friday during the closing press conference of the referendum initiators.

Slovenians will head to the "referendum on drinking water",  as it is popularly called by opponents of the legislation, giving them the final say on the government's amendment to the water law, which environmentalists claim prioritizes private interests over the public good and healthy water ecosystems.

A three-day early vote ended on Thursday, and interest was high. According to the State Electoral Commission, 84,196 citizens or 4.96 per cent of all eligible voters, already voted. The Electoral Commission on Friday said it was the "highest turnout in early voting in referendums and elections" in the country's history.

Amendments to the Water Act, proposed by the right-wing government of Janez Jansa, were adopted by parliament in late March in a shortened procedure, despite criticism by civil society and experts.

One of the campaigners, an environmental activist from NGO Eko Krog and an organic farmer, Uros Macerl, told BIRN in an interview that the government, under public pressure, had removed one controversial amendment, which intended to allow construction of manufacturing facilities that use hazardous materials in water-protected areas.

But another contentious provision, which allows...