Some 2,160 oil wrestlers to compete in Kırkpınar through weekend 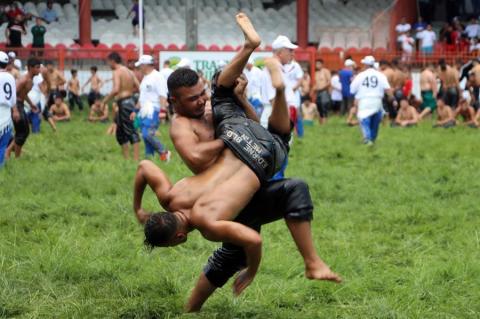 Turkey's oldest Kırkpınar Oil Wrestling Festival started in the northwestern province of Edirne on July 9 and will continue through the weekend, marking its 660th anniversary.

Some 2,160 wrestlers will compete at a field in Sarayiçi, one of Edirne's most crucial recreational sites.

Thousands of fans from different age groups, cultures and regions came to the city to see wrestlers competing for the Golden Belt and the title of Başpehlivan (chief wrestler).

The event will end on July 11 with the final wrestling match for the title of Başpehlivan.

Wrestlers from the southern Mediterranean coastal city of Antalya have dominated the festival in the last 10 years, except for 2014 and 2016. Fatih Atlı from Samsun and Recep Kara from Ordu claimed the title in 2014 and 2016, respectively.

Two-time Chief Wrestler İsmail Balaban from Antalya will not participate in this year's festival, as he says he is not ready for the wrestling match this time.

"There is also a risk of an injury if I wrestle. I don't want to disappoint spectators either. I will not be able to participate in Kırkpınar this year," he said.

Balaban, who is 33 years old, participated in Turkey's popular reality competition show called Survivor, held in the Dominican Republic from January to June, winning the 2021 title.

According to the Culture and Tourism Ministry, the festival originated in the 14th century Rumeli (southeastern Europe), and with its long-celebrated history, it is one of...