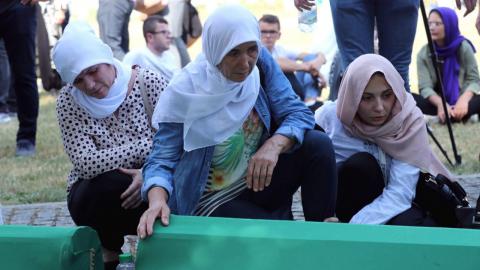 Mourners gathered at the Srebrenica Memorial Centre on Sunday for a commemoration of the 26th anniversary of the July 1995 genocide and the burial of 19 more victims of the mass killings of more than 7,000 Bosniak men and boys.

The youngest victim to be buried this year was Azmir Osmanovic, who was 16 when he was killed in the massacres by Bosnian Serb forces. His skull was found in a mass grave in Poljanci, near Srebrenica, and was identified in May.

"What is perhaps the hardest thing for me is that my father, who struggled to find my brother's bones, wasn't able to bury him," said his brother Azir Osmanovic, explaining that his father died three months before the remains of his son were found.

Unlike last year's anniversary event, which was held under stricter measures because of the coronavirus pandemic, this year the funeral was attended by a large number of family members and other mourners, while some international officials sent video messages of condolence.

Some also called for an end to denials of the genocide. EU Enlargement Commissioner Oliver Varhelyi pointed out that the killings and deportations of Bosniaks from Srebrenica were assessed as genocide by two international courts.

The president of the Mechanism for International Criminal Tribunals, Carmel Agius, said in a video message that "the denial of crimes shocks me to my core".

"It is a repudiation of the lived experiences of the victims, as well as the facts repeatedly established by the international tribunals," Agius said.

The US ambassador to Sarajevo, Eric Nelson, said in a message meanwhile that "the glorification of war crimes and war criminals is unacceptable."