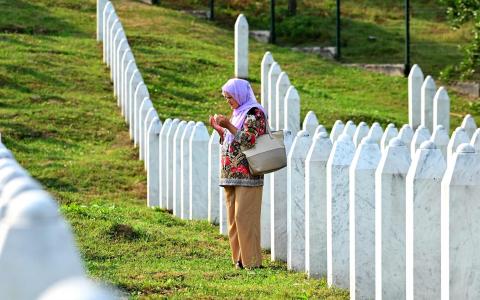 The Turkish president on July 11 commemorated the 26th anniversary of the Srebrenica genocide, voicing his sorrow and sympathy to the victims.

In a video message at the memorial ceremony to mark the massacre's anniversary in Bosnia, President Recep Tayyip Erdoğan said Turkey will continue to stand with Bosnia and Herzegovina and Bosnians.

Turkey will never let the genocide, which is "a black mark in the history of Europe and humanity," be forgotten, he added.

"The wounds Srebrenica opened in our hearts are still bleeding although 26 years have passed," Erdoğan said.

Recalling the court decree on the war criminal, Erdoğan said although the decree cannot alleviate the sufferings of the "tragedy in the heart of Europe," it can help prevent other genocides.

He underlined the significance of peace in Bosnia and Herzegovina, which harbors different beliefs, cultures and ethnicities, saying its stability is necessary for all of Europe, particularly the Balkans.

The Turkish president called on political figures to oppose hatred, violence and discrimination, and reunite based on common human values. "Making peace permanent on these lands [Bosnia and Herzegovina] is our common duty," he said.

Erdoğan also extended his condolences to the families of the genocide victims.

Meanwhile, Vice President Fuat Oktay on Twitter quoted the statement of Alija Izetbegovic, independent Bosnia's first president: "Whatever you do, don't forget the genocide. Because the forgotten genocide is repeated."

"We have not forgotten, we will not forget ... On the 26th anniversary of the #Srebrenica genocide, I commemorate our 8,372 Bosnian brothers who were martyred. May their place be heaven," he said.