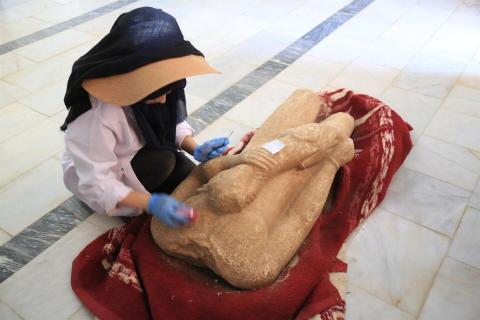 Two 2,500-year-old marble statues and an inscription have been found during excavations at the Temple of Zeus Lepsynos, one of the best-preserved Roman temples of Anatolia, in the western province of Muğla.

Built with donations in the second century B.C., the temple is located in the ancient city of Euromos.

Abuzer Kızıl, the head of the excavation committee and faculty member at Muğla Sıtkı Koçman University's Archeology Department, told the state-run Anadolu Agency on July 11 that they were currently carrying out works in the temple, agora, theater, bath and the city walls.

Expressing that Euromos is "one of the luckiest ancient cities in Anatolia" due to its location, Kızıl said that they started to implement important projects related to the Temple of Zeus Lepsynos.

"We took approximately 250 blocks stacked on top of each other on the southern facade of the temple and moved them to the appropriate area to be used in restoration works. We then started the excavation work, hoping that there were architectural blocks under the ground. While waiting to explore the architectural blocks, we encountered great surprises. Two statues and an inscription were discovered under the ground. We got very excited. In fact, it excited not only us but also the world of archeology, as here we have unearthed two very important links of the missing archaic sculpture of the Caria region and an inscription dating to the Hellenistic period," Kızıl said.

Kızıl added that the sculptures were categorized as kouros, a modern term given to free-standing ancient Greek sculptures.

"One of the two kouros unearthed at Euromos is naked while the other is wearing armor and a short skirt. The armor is made of leather, and it is remarkable to see that both...