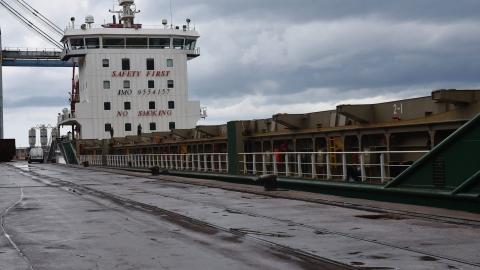 Port of Bar in Montenegro. Photo: Government of Montenegro

On July 10, the Prosecutors' Office launched an investigation into the breaking-in to a hangar in the port and theft of a large number of "Marble" cigarettes worth 500,000 euros.

"The prosecution requested the exclusion of video surveillance and an order to make an inventory of goods in the hangar. We also asked the court to search other warehouses within the Port of Bar,"  Radovan Djurisic, from the Prosecution Office in Bar, told the daily newspaper Vijesti.

On July 10, TV Vijesti reported that unknown persons broke into the hangar of the Aurora and Atlant Mont companies and stole 1,160 packages of cigarettes worth 500,000 euros.

Media reported that the hangars are owned by Dragan Vujacic who was tried before the Higher Court for cigarette smuggling in 2005 but acquitted in 2013.

According to the media, the stolen cigarettes were transported from the port by truck, while the Prosecutor's Office said it will monitor video surveillance from security cameras to find the perpetrator/s.

The port management on July 10 asked the authorities to investigate the case, claiming their internal security service monitors cargo vehicles leaving the port area but that they lack "the competence to verify the validity of documentation on the cargo they transport".

One of the country's ruling Democratic Front leaders, Nebojsa Medojevic, said authorities must investigate the case as soon as possible.

"How is it possible for goods to be stolen from a customs warehouse when there were with two padlocks? Somebody stole almost a tone of cigarettes, and authorities claim they don't know who did it," he posted on Twitter.

Since the collapse of Yugoslavia in...