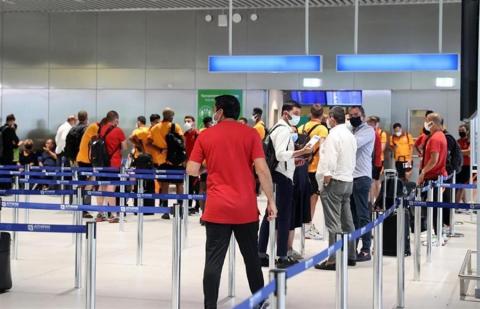 Turkish Foreign Minister Mevlüt Çavuşoğlu on July 12 had a telephone conversation with his Greek counterpart, Nikos Dendias, over the treatment members of the Istanbul football giant Galatasaray were subject to by Greek authorities in Athens.

Çavuşoğlu on social media said the "malignant and unsportsmanlike treatment that Galatasaray faced in Greece cannot be accepted. We always stand by all of our teams!"

"It is far from being gentlemanly and in good faith that the PCR tests performed by our group and the results of which are negative are not considered valid and the whole team is asked to retest," Foreign Ministry spokesperson Tanju Bilgiç said in a written statement, adding that the team returned to Turkey without entering Greece due to this "arbitrary approach and ill-treatment."

A dispute over coronavirus procedures has led to the cancellation of a friendly football match, with Turkish side Galatasaray pointing discrimination, rude and unfair treatment by Greek officials at the airport.

The PCR tests of players for the Istanbul side were rejected by Greek officials, with new virus tests demanded, Galatasaray announced July 13, leading to the cancellation of the match with Greek club Olympiacos.

Moreover, Greek officials made them wait at the airport for two hours even though they had completed all the procedures, said Galatasaray.

The team, dubbed the "Lions," said the rejection of their PCR tests and Greek officials' "rude" behavior were responsible for the cancellation and that they were flying back home.

"Galatasaray, the club that carries the Turkish flag on its jersey with great pride and that has represented Turkey in Europe many times, has been disrespected like this for the first time. We expect an...