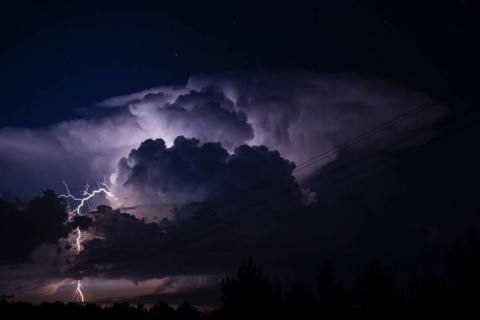 Ljubljana – Slovenia is bracing for a stormy night ahead with localised downpours and strong gusts of wind as a weather system reaches the country from the west.

The Environment Agency has issued a red alert due to the possibility of flash floods in western, southern and central parts of the country.

River levels will increase mainly in the north-east and the sea level will be raised until Thursday with the possibility of minor flooding at the time of midday high tide.

Drivers have been urged to exert caution and tolerance and those spending the night out at the seaside were cautioned to be careful.

The rain will stop throughout the country on Wednesday and the skies will start clearing up.

It will be changeable during the day with an odd shower or storm possible in the mountainous parts of western Slovenia. A south-westerly will blow.

Daytime highs will range from 23 to 28 degrees Celsius, up to 20 in the north-west.

The outlook for Thursday and Friday is for partly sunny with localised showers and storms in the afternoons, mainly on Friday.