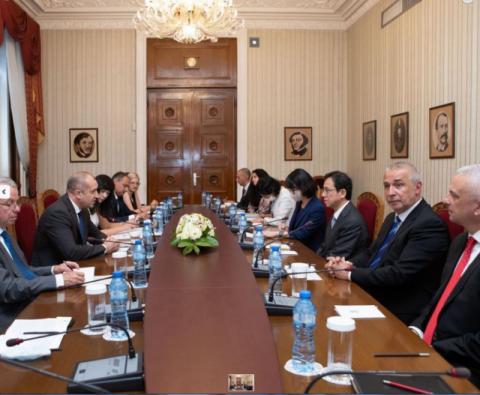 The increase of the Japanese investments in Bulgaria is an opportunity for the development of a qualitatively new model of the relations between the business and the institutions and the business and the society, as well as for the change of the economic environment in the country, Bulgaria's President Rumen Radev said on July 14. He met with representatives of the Japan-Bulgaria Business Association, as well as the Ambassador of Japan to Bulgaria Hiroshi Narahira.

The head of state highlighted the consistent actions of the presidential institution to achieve new dynamics in the economic and investment partnership between Bulgaria and Japan. President Rumen Radev held a number of meetings with Japanese business and institutions during his visit to Japan in 2019 on the occasion of the enthronement of Emperor Naruhito. In 2020, at a meeting to promote investment cooperation between Bulgaria and Japan, hosted by the Bulgarian President, the initiative to establish the Japan-Bulgaria Business Association was presented.

The Ambassador of Japan to Bulgaria Hiroshi Narahira welcomed the priority set by the Bulgarian Head of State for enhanced cooperation in the field of science, education and innovation within the Three Seas Initiative. Companies from Japan are interested to invest in regional projects in the area of "intelligent" transport, energy and digital connectivity in Eastern Europe.