Fur Flies in Croatia Over Tiger Filmed on Passenger Ferry 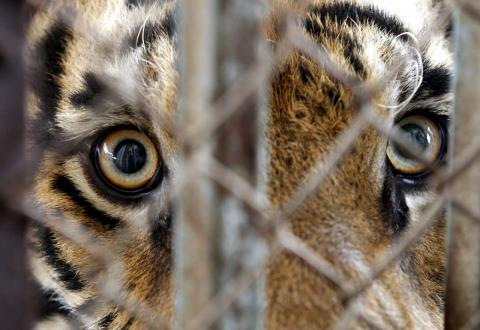 News about an unusual ferry passenger - a Bengal tiger - on a ferry connecting the Croatian island of Hvar and the coastal city of Split has made headlines but also drawn concern among animal rights groups.

After photos and videos of the tiger held in the trailer of the ferry's garage were published in the media, questions are being asked why a tiger was being transported in such a way, while the transport company Jadrolinija said it had no knowledge a big cat being transported on its vessel.

The Animal Friends Association issued a critical statement, saying that the event "symbolizes the terrible reality of wildlife protection in Croatia" and adding that it would submit complaints to "all the competent institutions".

The association warned authorities two years ago that there was a tiger on the island at an "unregistered zoo", which houses a large number of domestic and wild animals, including "a tiger, a cayman crocodile, and a tamarin monkey".

The so-called zoo is a private farm owned by a caterer from Hvar, Ivan Gospodnetic. The farm is open to visitors and there is no entrance fee.

In 2019, veterinary inspectors responded to Animal Friends' reports about the zoo, saying that some irregularities had been noted and misdemeanour proceedings would be launched against the owner, but adding that the site was not an "unregistered zoo".