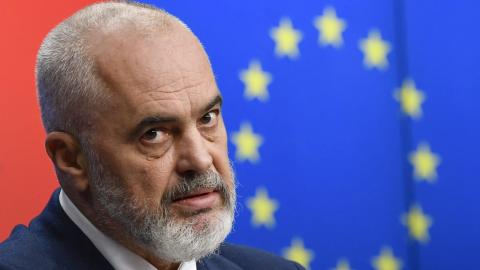 Albania's Prime Minister Edi Rama has criticised the way the European Union is handling the integration process for his own country and that of neighbouring North Macedonia, saying the two countries are being held hostage by the nationalisms of larger EU members.

Speaking at the Symi Simpozium in Athens, organised by former Greek prime minister George Papandreou, the Albanian leader focused on Albania`s perspective, while it waits for the bloc to consent to opening membership talks for two new aspirants.

Two recent attempts have failed since 2019, and Rama expressed Albania's fatigue when it comes to the much-awaited green light.

"We are hostages of EU nationalisms. The path of Western Balkan integration is dependent more and more on EU nationalisms. When I talk about EU nationalisms, I am talking about the nationalisms of powerful countries holding hostage leaders who are not yet nationalists," he said referring to Bulgaria's blockage of North Macedonia.

"In the Balkans, when we copy, we go further than the original," he warned.

The First Inter-Governmental Conference with Albania and Northern Macedonia could not be held this year after negotiations were blocked by Bulgaria.

Sofia blocked the start of North Macedonia's EU accession talks last year, citing disputes over its history, language and identity, which it insists have Bulgarian roots.

"The Bulgarian attitude is a result of what Bulgaria has learned within the EU from the great...