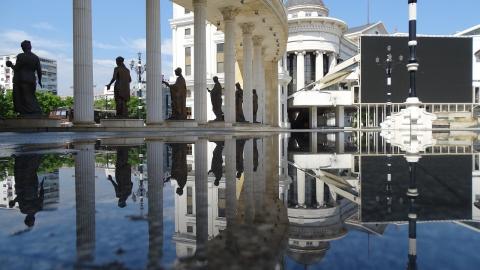 Local TV broadcasting a special statement by Bulgarian TV host turned politician, Slavi Trifonov, and leader of the 'There Is Such a People' party after the country's parliamentary elections, in Sofia. Photo: EPA-EFE/VASSIL DONEV

Another election, another deadlock. This just about sums up the political situation in Bulgaria - after the April Parliamentary elections delivered a fragmented Parliament unable to cobble together a governing majority, a repeated election on July 11 did not change the equation much.

What next for Bulgaria? Can a way be found to forge a governing majority? In his comment for Balkan Insight, Tom Junes argues that Bulgaria is heading into dangerously unchartered waters. An extremely unstable minority government or - perhaps more likely - a third election are the most likely outcomes on the cards.

Davor Dragicevic Returns to Bosnia to ‘Get Justice for my Son’