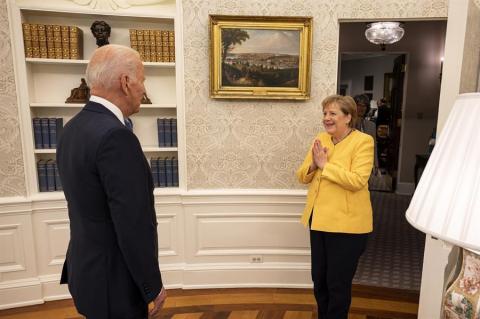 Welcoming Angela Merkel to the White House for a final time, President Joe Biden renewed his concerns to the German chancellor on July 15 about a major, nearly complete Russia-to-Germany gas pipeline but said they agreed Russia must not be allowed to use energy as a weapon.

The two discussed- though made no apparent headway- on differences over the Nord Stream 2 pipeline during a largely friendly farewell visit for Merkel as she nears the end of a political career that has spanned four American presidencies.

"On a personal note, I must tell you I will miss seeing you at our summits," Biden said as he stood by Merkel, the second-longest serving chancellor in Germany's history, at a late afternoon White House press conference. "I truly will."
Merkel, who had a famously difficult relationship with former President Donald Trump, showed her ease and familiarity with Biden, who has long been a fixture in international politics, repeatedly referring to him as "Dear Joe."

Asked to compare her relationship with Biden to hers with Trump, Merkel remained diplomatic, saying only that it was in any German chancellor's interest to "work with every American president." She added with a smile, "Today was a very friendly exchange."

But their personal warmth notwithstanding, the U.S.-German relationship is entering new territory as Merkel, who is not seeking another term in September elections, nears her departure from office. There are concerns on both sides about how the two nations will negotiate growing disagreements.

The United States has long argued that the Nord Stream 2 project will threaten European energy security by increasing the continent's reliance on Russian gas and allowing Russia to exert political pressure on vulnerable...