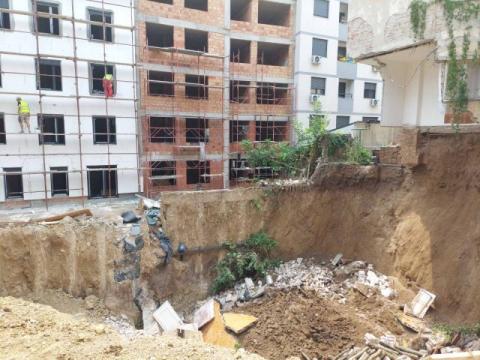 Tenants say that they have been warning about the collapse of the building for a long time, because the tiles and walls were cracked in the previous days.
As we were told, the building was not completely demolished, but a part of the apartment on the ground floor, but for security reasons, all the tenants who found themselves in the apartments were evacuated.

Workers on the construction site are still working, despite the circumstances.

After the accident, the deputy mayor of Belgrade, Goran Vesi, and Darko Glavas, the secretary for emergency situations, came to the spot.
Vesi announced that accommodation will be provided for the tenants of the collapsed building, for which the investor will pay, as well as all the damage that was done. He said that the most important thing is that no one was injured, that people will be temporarily accommodated, and that this is a lesson that care must be taken on all construction sites to ensure all conditions.
The investor will be held criminally liable. The inspection is on the ground, there will be a report tomorrow.
Vesi also stated that for four of the six families living in that building, accommodation will be provided in one of the Belgrade hotels. Vesi told reporters that the Inspection banned the use of that building, and that the accommodation for the tenants would be...