HDP MP returns to parliament after verdict on rights violation 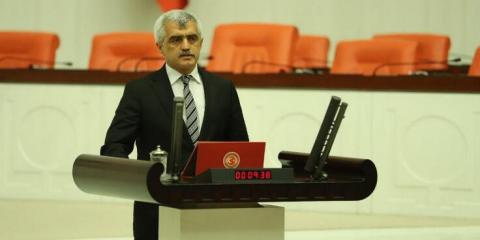 Former Peoples' Democratic Party (HDP) deputy Ömer Faruk Gergerlioğlu has returned to the Turkish Parliament following a Constitutional Court verdict which said his rights were violated when convicted and stripped of his immunity.

During the parliament's General Assembly on July 16, Gergerlioğlu's return was announced after a local court sent a summary of proceedings to the Justice Ministry for the retrial of the opposition lawmaker.

Gergerlioğlu was convicted in 2018 and sentenced to two years and six months in prison for "spreading terrorist propaganda" after he retweeted a 2016 news article about a call for peace made by the illegal PKK group. An appeals court confirmed the conviction, saying he was "owning" and "legitimizing" the PKK by sharing the link, which included a photograph of members of the group. He was jailed in early April 2021 after this conviction.

The PKK is listed as a terrorist organization in Turkey, Europe and the United States.

The Constitutional Court unanimously decided that Gergerlioğlu's "right to be elected and engage in political activities" and "the right to personal freedom and security" were violated in line with Article 67 of the constitution. He was released from prison on July 6.

According to Article 83/2 of the Turkish Constitution, parliament must decide to abolish the parliamentary immunity of deputies before legal proceedings can continue against lawmakers, the court said in the summary of proceeding it sent to the...