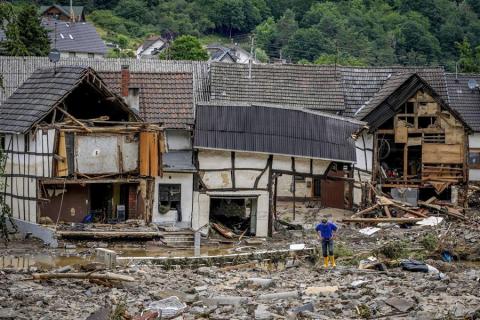 German emergency responders were on July 16 still searching for hundreds of missing people after the worst floods in living memory killed more than 80 in the country's west.

"I fear that we will only see the full extent of the disaster in the coming days," Chancellor Angela Merkel said from Washington, where she met with President Joe Biden.

Catching residents of several regions unaware and leaving destruction and despair in their wake, the masses of water were dubbed the "flood of death" by top-selling daily Bild.

Neighboring Belgium counted at least nine dead, while Luxembourg and the Netherlands were also severely affected by the torrents of water, with thousands evacuated in the city of Maastricht.

But Germany's toll was by far the highest at 59, and likely to rise with large numbers of people still missing in North Rhine-Westphalia and Rhineland-Palatinate, the hardest-hit states.

In the devastated Ahrweiler district of Rhineland-Palatinate around 1,300 people were unaccounted for, although local authorities told Bild the high number was likely down to damaged phone networks.

Regional interior minister Roger Lewentz told broadcaster SWR that "we believe there are still 40, 50 or 60 people missing, and when you haven't heard for people for such a long time... you have to fear the worst."
"The number of victims will likely keep rising in the coming days," he added.

What's more, continuing rain is forecast for parts of the west, where water levels in the Rhine river and its tributaries are rising dangerously.
Around 1,000 soldiers have been deployed to help with rescue operations and rubble-clearing in affected towns and villages.

Streets and houses under water, overturned cars and uprooted...