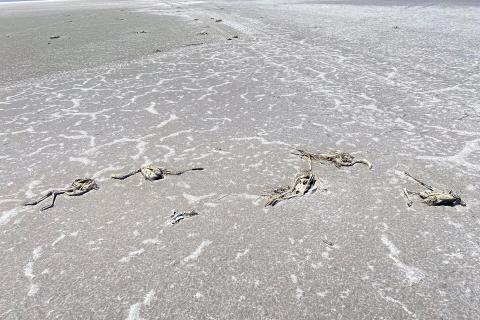 Turkish authorities have launched an investigation after thousands of baby flamingos were found dead on a dried part of Lake Tuz (Lake Salt) in the Central Anatolian province of Konya this week, reviving debates about the impact of drought on the ecosystem.

Lake Tuz, the second largest lake in Turkey and one of the largest hypersaline lakes in the world, is among the favorite habitat of migratory animals and has long been a hatching ground for flamingos as they usually prefer to lay their eggs in salty and wet areas. However, the drought due to lack of rainfall and excessive use of underground water has led to a lake waters to sap, making finding food a challenge for the flock of flamingos.

A video showing thousands of baby flamingos that have died on the dry floor of the lake has caused public outcry on July 13 after it went viral on social media platforms.

"Locals built barriers in water canals that feed the lake, and baby flamingos died as a result of the shrink in their water and food supply. This is a massacre," said photographer Fahri Tunç.

Farmers in the area built barriers to redirect the water to their fields, preventing the canals from feeding the lake, Tunç noted, adding that the drought in the basin victimizes multiple species.

"These deaths should not be blamed on the climate crisis or the farmer. Wrong agricultural and irrigation policies are the primary cause of these deaths," Kılıç said, adding that she was sad about the incident into which the Environment and Urbanization Ministry and Konya Governor's Office launched investigations....