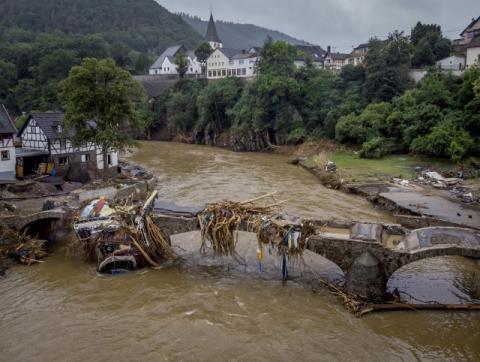 The water level in many cities is still very high, numerous houses have continued to collapse, and rescuers have been searching for survivors in the most endangered parts of West Germany since this morning, Reuters reports.
According to today's police estimates, at least 133 people were killed in the floods, including about 90 people in the district of Ahrweiler south of Cologne, and hundreds of people are still listed as missing.
About 700 residents were evacuated late last night, and during the last few days, the floods led to the interruption of electricity and telecommunication deliveries in the states of Rhineland-Palatinate and North Rhine-Westphalia.

The AP report states that the floods also affected parts of Belgium and the Netherlands, and that at least 20 people lost their lives in Belgium.
German President Frank-Walter Steinmeier planned to travel today to Erftstadt, southwest of Cologne, where a heavy rescue operation was carried out yesterday and assistance was provided to people who remained in the ruins of their houses.
President Steinmeier said he was "stunned" by the devastation caused by the floods and appealed for help to the families of the victims and the cities that suffered devastation, the London Guardian reported earlier.

"In the critical moment, our country is united. It is important to show solidarity with those who were taken away by the floods," the German President said.
Although the European Flood Warning Service issued warnings at the beginning of last week, experts are wondering why the number of victims is so high, and hydrologist Hannah Kock estimated that a "monumental systemic failure" occurred.
German Interior Minister...