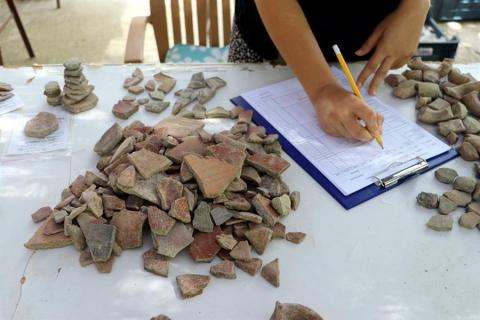 Archaeological excavations carried out on Aççana Mound in Alalah, the capital of the Mukish Kingdom during the Middle and Late Bronze Age in the southeastern province of Hatay, aim to unearth remains dating back 4,000 years.

In the mound, where the first excavations were carried out by British archaeologist Leonard Woolley in the 1930s, the 2021 season excavations have been carried out under the leadership of Hatay Mustafa Kemal University (MKU) Archeology Department Associate Professor Murat Akar with a team of 14 people.

Excavations in the mound, which is located on an area of approximately 22 hectares and whose ruins date back 4,000 years, are carried out at an average depth of 4.5 meters, covering an area of 120 square meters, which is called the temples area.

At the 3,400-year-old ruins in the temples area of the mound, works shed light on the culture, belief, lifestyle, trade and human mobility in Alalah, the capital of the Mukish Kingdom.

The finds obtained from the excavations are examined by experts at the Culture and Tourism Ministry Aççana Mound Excavation House.

Speaking to state-run Anadolu Agency, Akar said that Alalah is one of the most important archaeological sites in the Amik Plain, where traces of the Bronze Age can be unearthed.

"The Late Bronze Age is a period in which great empires emerged. This is a period when the Hittite Empire in Anatolia, the Egyptian Empire in the south and the Mitanni Empire on the Euphrates and Tigris axis emerged. The Amik Plain is the most important spot, where the traces of wars, diplomatic agreements and commercial relations of these great empires with each other can be traced. In other words, the Hittite Empire wanted to be an effective power in the Amik Plain,...