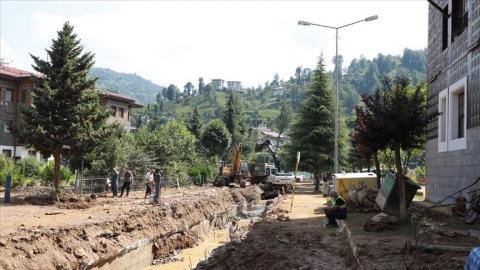 Parts of Turkey's Black Sea region hit by flooding and landslides will be officially declared a disaster area, the nation's president said on July 17.
Speaking at a hospital opening and inaugurations of other newly completed projects in Turkey's eastern Erzurum province, Recep Tayyip Erdoğan said the formal declaration will be announced after the next Cabinet meeting, likely at the start of next week.
The Disaster and Emergency Management Authority said downpours hit northeastern Rize on Wednesday after landslides caused heavy damage in some areas, with a building destroyed in the village of Muradiye.
At least six people died, with two people missing, in flooding and landslides triggered by heavy rain.
Interior Minister Süleyman Soylu came to the region to assess the situation along with Transport and Infrastructure Minister Adil Karaismailoğlu and Environment and Urbanization Minister Murat Kurum.
Around 5 million Turkish liras ($582,000) will be sent to the region to help recovery efforts.
'Investing throughout Turkey'
Also speaking on investments in eastern Turkey, Erdoğan said the current market value of today's inaugurated investments reached a total of 9.5 billion Turkish liras ($1.11 billion).
"We will continue to embrace the full breadth of Turkey, from Erzurum, Diyarbakır, Hatay, and Trabzon to Antalya, Tekirdağ, Van, and Bursa, and introduce projects and services to every inch of our homeland," said Erdoğan, referring to provinces throughout Turkey.
"We do this because we love this country with all its colors. Because we love this nation with all its people. Because we have taken on the responsibility to build a great and strong Turkey through the bridge we built from the past to the future," he added...