Forest fires break out across Turkey as mercury rises 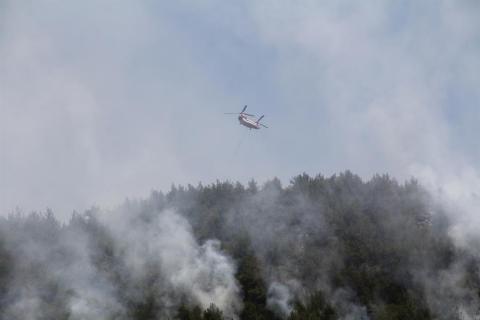 Massive fires broke out in forestlands across Turkey as temperature rises above the seasonal normal.

Amid a sweltering heatwave in Turkey, forest fires in the country's western and southern coasts have been ongoing over the past two days, with hundreds of hectares of forest land already burnt to ashes.

"Some 20 fires have broken out as of today which 18 of them have been taken are under control," Agriculture and Forestry Minister Bekir Pakdemirli told reporters during his observations in the fire area in the southern province of Mersin's Aydıncık district.

Twenty-one firefighting helicopters and amphibious airplanes took off in the early morning hours to battle the fire that broke out on July 15 in Aydıncık.

More than 850 forest workers and firefighters, including sprinklers, bulldozers, water tanks and water supply vehicles, are also trying to contain the fire that the wind helped quickly spread over the region.

Noting that the area where the fire took place is a steep and mountainous land, Demirören News Agency said that intense vehicle traffic was seen in the region due to the fire and three houses were evacuated as a precaution.

Pakdemirli noted that the fire affected an area of about 650 hectares, but it is not possible to say that the entire area was burned.

"We are at a point where the temperature is very high, the humidity is very low and the wind is blowing at 50 kilometers per hour in some spots," Pakdemirli said, adding that there was no casualty or loss of property due to the fire so far.

Another forest fire in the Hassa district of the southern province of Hatay that broke out on July 15 has also been ongoing for two days, with 80 hectares of forest land having...