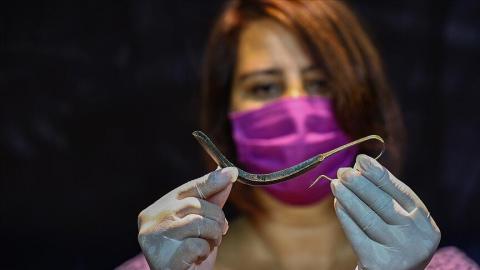 The scraping tool "strigilis," which has been found during the excavations in the ancient city of Teos in the Seferihisar district of İzmir and was once used to clean the bodies of gladiators and athletes from oil and sand about 2,300 years ago, has been put on display at the İzmir Archaeology Museum.

It is estimated that the strigil, found in the cemetery area during the excavations in Teos, belonged to an athlete or gladiator working in the field of education and sports.

The strigil, which is approximately 16 centimeters in size and has a form resembling a half moon, has embroideries depicting cockfighting scenes.

Considered a "priceless" work by historians, the tool will remain on display until the end of July.

Speaking to the state-run Anadolu Agency, the museum director Hünkar Keser said that strigil could be translated into Turkish as "cleaning spoon."

Noting that the cleaning spoon was used by athletes and gladiators in the ancient age, Keser gave the following information about the use of the tool: "We know that athletes covered their bodies with olive oil before sports activities. After completing their work in the sandy areas, they had to clean their bodies. With this spoon, called strigilis, they scraped their bodies and picked up the coarse dirt. We know that it is a custom-made spoon. The cockfighting figure on it is also an interesting detail. Fighting was a form of entertainment used to attract people's attention at that time. The use of strigils is also specific to that period."

Noting that the strigil is unique like the other ancient artifacts in the museum, Keser said, "This rare and special artifact found in the cemetery excavations in the ancient city of Teos attract a lot of...