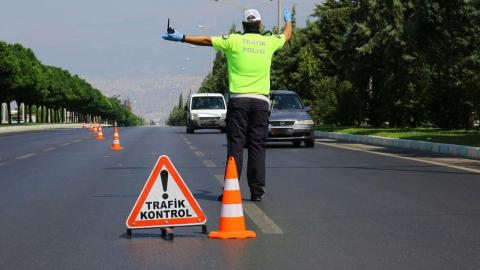 Turkey is tightening traffic checks and controls as millions of people are hitting the roads to travel to resort towns and other cities to benefit from the long Eid al-Adha holiday.

At least 60 people were killed in road accidents during the Eid al-Adha holiday last year.

As people started leaving big cities, such as Istanbul, Ankara and İzmir to spend their holiday with their relatives or in coastal provinces, the Interior Ministry has issued a circular on what measures are being taken to prevent accidents.

The Eid al-Adha begins on July 20 and ends on July 23, but as it coincides with the weekend, people will enjoy at least nine days of holiday. Holidaymakers are already on the road to reach resort towns. Cars already formed kilometers-long lines at the entrance to the popular resort town Bodrum in the Muğla province on the Aegean coast. There were similar scenes in Istanbul with people leaving the mega city in droves.

Tighter checks and measures were already started being implemented on July 14 and will continue until July 26 for 13 days, the ministry said in the circular.

During this period, nearly 9,300 units with more than 17,400 personnel will be on the roads each day to conduct checks. Throughout those 13 days, over 120,000 teams and nearly 257,000 personnel will be on duty. Also 45 high ranking officials, including police chiefs and gendarmerie officers, will inspect the measures those personnel take at check points where road accidents frequently occur.

Moreover, 690 civilian personnel will carry out checks on intercity buses during the busy Eid al-Adha holiday while 15 helicopters and 79 drones will watch over the traffic on the roads.

Intercity bus drivers aged above 66 and...