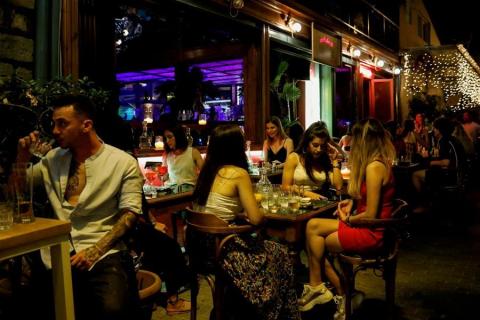 Greece on July 17 imposed a five-hour night curfew and other restrictions on the popular travel island of Mykonos because of a "worrying" spike in local Covid-19 infections, officials said.

The measures include a curfew from 1:00 am to 6:00 am and a ban on bars, clubs and restaurants from playing music, and are effective immediately until July 26, deputy civil protection minister Nikos Hardalias said in a statement.

"We call on the residents, visitors and business owners of our beautiful island to follow the measures faithfully...so that the spread of the virus can be swiftly checked and Mykonos can return to normal," Hardalias said.

One of Greece's top travel destinations, Mykonos draws hundreds of thousands of visitors annually -- including a steady stream of celebrities -- to its picturesque beaches and vibrant nightlife.

But Greek authorities have been lately alarmed by the number of clandestine parties held in the island's numerous villas.

Hardalias on July 15 had warned that active cases on Mykonos had quadrupled to over 300 in just a week.
On Saturday he said organisers of private gatherings of over 20 people risk fines of up to 200,000 euros ($236,000).

Greece is experiencing a steady climb in Covid-19 infections in recent days, largely blamed on the more contagious Delta variant.

Nearly 2,700 new cases were announced nationwide on Friday, compared to fewer than 400 three weeks prior.

Skyrocketing Energy Prices Are Worse than Pandemic and Will Stay Longer
Greek singer Josephine makes it on NY Times Square Billboard (video)
PM Mitsotakis in NY: Greece 2.0 plan is made by Greeks for Greeks
3.7 earthquake hit near Nisyros