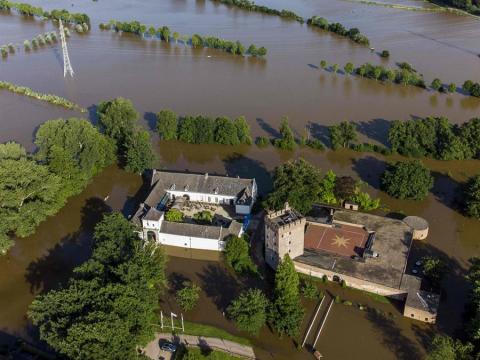 Chancellor Angela Merkel is to visit flood-ravaged areas in Germany on July 18 to survey the damage and meet survivors, after days of extreme rainfall in western Europe left at least 183 people dead and dozens missing.

Merkel is scheduled to travel to the village of Schuld in Rhineland-Palatinate state, one of the two hardest-hit regions in western Germany, where the swollen Ahr river swept away houses and left debris piled high in the streets.

At least 156 people have died since Wednesday in Germany's worst flooding in living memory, police said in an update Sunday morning.

In Rhineland-Palatinate state alone, police reported 110 dead and 670 injured.
At least 27 people have also lost their lives in neighbouring Belgium.

Rescue crews in both countries were sifting through rubble to find victims, often in dangerous conditions.
The historic downpours also battered Switzerland, Luxembourg and the Netherlands.
As the waters began to recede in Rhineland-Palatinate and neighbouring North-Rhine Westphalia, concern shifted south to Germany's Upper Bavaria region, where heavy rains inundated basements and swelled rivers and creeks late Saturday.

One person died in Berchtesgadener Land, a spokeswoman for the Bavarian district told AFP.
In Austria, emergency workers in the Salzburg and Tyrol regions were on high alert for flooding. The historic town centre of Hallein, near the German frontier, was under water.
"Heavy rains and storms are unfortunately causing severe damage in several places in Austria," Chancellor Sebastian Kurz said on Twitter.

Merkel has called the floods a "tragedy" and pledged support from the federal government for Germany's stricken municipalities.