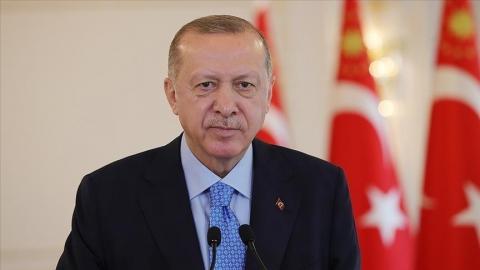 Turkish President Recep Tayyip Erdoğan is set to start a two-day official visit to the Turkish Republic of Northern Cyprus (TRNC) on July 19.

During his visit, Erdoğan will address a special session of the Turkish Cypriot parliament and attend celebrations of July 20 Peace and Freedom Day, marking the 47th anniversary of Turkey's 1974 Peace Operation, which protected the island's Turkish Cypriot community from Greek Cypriot violence.

He also will meet with Turkish Cypriot President Ersin Tatar to exchange views on the latest developments in the Eastern Mediterranean and bilateral relations.

Erdoğan will also attend a mass inauguration ceremony of some completed projects.

Every year the TRNC celebrates July 20 as its Peace and Freedom Day to mark the operation - a large-scale military intervention to protect Turkish Cypriots from violence that struck the island in 1974.

Cyprus has been mired in a decades-long dispute between Greek and Turkish Cypriots, despite a series of diplomatic efforts by the U.N. to achieve a comprehensive settlement.

In the early 1960s, ethnic attacks forced Turkish Cypriots to withdraw into enclaves for their safety.

In 1974, a Greek Cypriot coup aiming at Greece's annexation led to Turkey's military intervention as a guarantor power to protect Turkish Cypriots from persecution and violence.

The Turkish Republic of Northern Cyprus (TRNC) was founded in 1983.

​​​​​​​The island has seen an on-and-off peace process in recent years, including a failed 2017 initiative in Switzerland under the auspices of guarantor countries Turkey, Greece, and the U.K.

The Greek Cypriot administration entered the European Union in 2004, the same year that Greek Cypriots thwarted the U.N.'s...