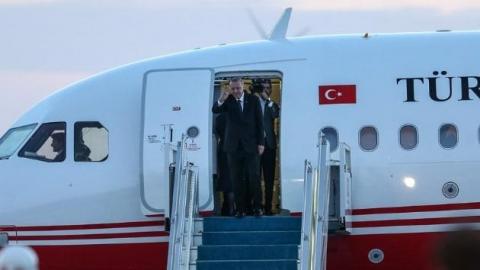 President Recep Tayyip Erdoğan heads to Turkish Cyprus on July 19 to mark the anniversary of Turkey's 1974 intervention, a visit which is closely monitored by the European Union and the Greek Cypriots as the trip is seen as a show of strength to support a two-state solution to the island's decades-long division.

The visit comes amid the reconciliation process that continues in Turkey's relations with the EU and Greece, while the bloc warns Ankara not to jeopardize these efforts by increasing tensions during Erdoğan's trip to Turkish Cyprus.

Last week, Erdoğan said he would give "good news" during a visit to Turkish Cyprus.

"I hope that with our ceremonies this year, we will have messages in the best way possible for the establishment of world peace both on the Island and in the whole world," he said.

Erdoğan will embark on his trip to Turkish Cyprus on July 19 with a large delegation and address parliament there, he said, noting that he would return to Turkey on July 20.

"I want to give the good news to Turkish Cyprus at the parliament there. We have a good step. We have finished the preliminary studies," the president stated.

All the members of the ruling Justice and Development Party's (AKP) central decision-making body will join Erdoğan's trip in a bid to display Turkey's and the ruling party's full support to Turkish Cyprus, AKP spokesperson Ömer Çelik said last week.

The daily reported about five anticipated developments during the visit. It is speculated that Azerbaijan's decision to establish diplomatic relations with the Turkish Cyprus...