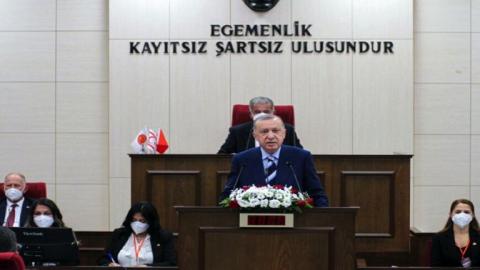 Exactly 47 years after Turkey's invasion of Cyprus, Turkish President Recep Tayyip Erdogan arrived in the Turkish-occupied Cyprus to celebrate the invasion that led to the occupation of 40 percent of the island and the ethnic cleansing of the north, leaving 200,000 Greek Cypriots refugees in their own land.

The visit comes three months after the failed, informal five-way UN-sponsored talks in Geneva (the Republic of Cyprus, Turkish-Cypriot leader Ersin Tatar, Greece and Turkey plus UN Secretary Antonio Guterres) which reached a deadlock due to the intransigent position of Ankara and Tatar demanding a two-state solution, which is to say a final, de jure partition of the island through international recognition of the breakaway state - "Turkish Republic of Northern Cyprus"- created by Ankara in the occupied north in November,1983.

Turkey, whose economy is in dire straits, is the only country in the world that recognises it and it depends entirely on Ankara - which keeps 40,000 occupation troops on the island - for its very economic survival.

In the years after the occupation a very high percentage of the Turkish Cypriots emigrated to the UK and other countries due to the insufferable socio-economic conditions in the occupied territories, and the original Turkish Cypriots and their descendants now constitute less than half of the population.

The two-state solution that Erdogan trumpeted today in his address to the "legislature" of the secessionist state is a total departure from the solution of a bi-zonal, bi-communal federation that has been agreed upon objective the Greek Cypriot and Turkish Cypriot sides in over four decades of UN-sponsored talks and has been enshrined in a host of UN Security Council resolutions.