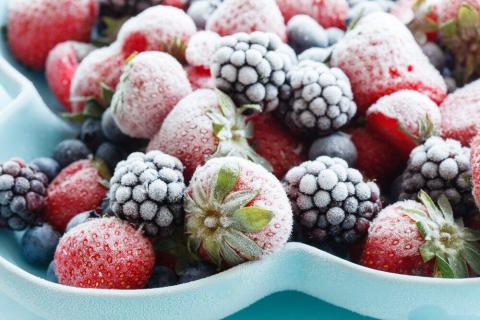 Turkey's exports of frozen fruit and vegetables saw a 32 percent increase in the first six months of the year, with the global demand for the products soaring during the coronavirus pandemic.

The sector has now set eyes on a target of $250 million yearly exports.

According to data by the Aegean Exporters' Association, Turkey's exports of fresh fruit and vegetables increased by 20 percent from $777 million to $936 million in the January-June period.

In the sector, where dozens of products are exported from carbonated drinks to fruit juice and from pickles to tomato paste, the export of frozen fruits and vegetables increased by 32 percent in the January-June period to $118 million.

In frozen products, $70 million worth of vegetables and $48 million of fruit were exported.

Aegean Fresh Fruits and Vegetables Exporters' Association chair Hayrettin Plane said that the United States and European countries were predominant in the frozen fruit and vegetable exports to 121 countries.

Indicating that the U.S. ranks first in frozen fruit and vegetable exports with $20 million, Uçar said, "Germany ranks second with $15 million, and the United Kingdom ranks third with $8 million."

The export of frozen fruits and vegetables is a good example of value-added product exports, Uçar said.

"Both the added value and demand of frozen foods are increasing exponentially day by day," he added.

"We exported $203 million of frozen fruit and vegetables in 2020, and we aim to increase this figure to $250 million this year," Uçar stated.

Erkan Tabak, an executive of the Özgörkey Food in İzmir, said that they achieved an increase of over 40 percent in their exports as a company.

Emphasizing that the consumption in the...