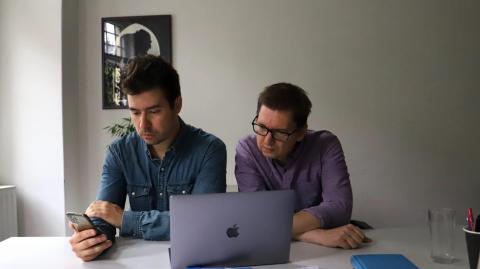 In response to the revelations, Hungary's journalist association demanded an immediate explanation from the Fidesz government. And Janos Stummer, of the formerly radical right Jobbik party and current chairman of the parliamentary committee on national security, described the scandal as Hungary's Watergate.

"If Fidesz remains silent, it means they admit it," Stummer said, while calling for an extraordinary parliamentary committee to investigate the case.

Szabolcs Panyi, one of the journalists targeted (and a BIRN commentator), published a long story on Telex.hu, writing that the Hungarian government has been a client of NSO since 2018. NSO is licensed to sell its spyware only with the express permission of the Israeli Defence Ministry and the program can purportedly only be used to fight criminals or terrorism.

The spyware reportedly began being used in Hungary after high-level talks between Hungarian and Israeli government officials. The head of Hungary's intelligence services and key Orban ally Jozsef Czukor - currently Hungary's ambassador to Switzerland - was even welcomed by Israeli Prime Minister Benjamin Netanjahu, which is an unusual gesture in diplomatic circles unless something particularly important is on the agenda.

Another person reportedly targeted by the spyware was entrepreneur Zoltan Varga, one of the richest media moguls in Hungary and owner of Central Media Group, which publishes the government-critical news site 24.hu.

According to the reports, Varga organised a dinner in June 2018, two months after the last election, for fellow businessmen, most of whom were critical of Viktor Orban's government. Two weeks after the dinner,...