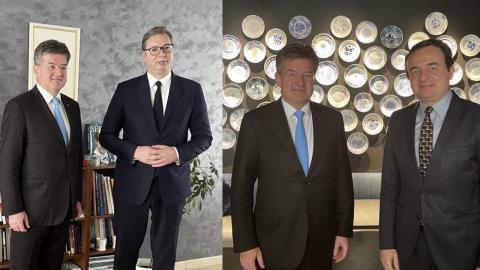 No progress was made in the second meeting between Kosovo Prime Minister Albin Kurti and Serbian President Aleksandar Vucic within the EU-facilitated dialogue on Monday, where the missing persons issue, among other things, was discussed.

Serbia's Vucic said after meeting in Brussels that during the previous conversation he thought it was impossible to have a worse meeting, but after today's talks, he said, he knows that is possible.

Vucic said after the meeting that he was now even more worried about the security of Serbs living in Kosovo, having in mind the atmosphere and increased attacks on Serbs in Kosovo in recent months.

Vucic said Serbia had agreed with three main points of the EU proposals which had been harmonized with the delegations from both Belgrade and Pristina, but that PM Kurti did not want to accept the second point, which says no side will do anything which might cause destabilization.

"There were three points, to intensify joint efforts to identify the remains of the missing persons, to refrain from things that could potentially destabilize the situation on the ground and for the main negotiators to meet regularly, once a month, and prepare meetings when necessary," the Serbian President said.

"They [Kosovo] conditioned all the time with some new political criteria," Vucic said, adding that Kurti was now mentioning that Serbia was guilty of three genocides against Albanians in Kosovo - the first in 1878, when Serbia gained independence during the Berlin Congress, the second during the Balkan Wars and the Second World War, and the third in 1999, during the Kosovo war.