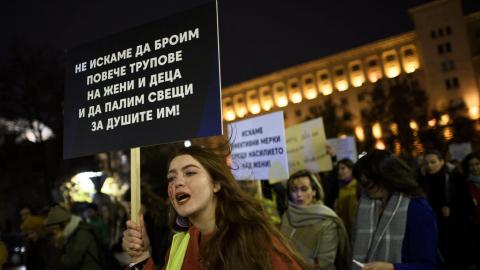 In Bulgaria in February-March 2021, women were responsible for 73 per cent of the overall share of children's carе and education.

"As a mother, my commitments increased as a result of the remote schooling system. Someone had to be with our boy almost all the time and I had to take on most of the care for his education and for the household," says Nelly Benova, a PR/media specialist and business owner from Sofia.

As I discuss the impact of the pandemic with friends and family, a curious difference between the attitudes of women in Bulgaria and Britain emerges.

In Britain, most women I speak with feel unsettled, frustrated or downright angry at unfairly having to shoulder most of the increased weight of family life while also working, worrying about their reproductive health, their employment security or their reduced political clout during the pandemic.

The gender-inequality dimension of the pandemic is a narrative ripe for discussion. By contrast, my conversation with Benova reveals that in Bulgaria, this lens is largely missing. I observe that women there do not seem agitated by the added pressure of the last year. "I am fine. I am an optimist. I tell myself that I can live without this or that," a small shop-owner from the Blagoevgrad region cheerfully informs me.

Among EU countries, Bulgaria is consistently at the bottom of the tables for happiness and wellbeing, with no discernible difference between women's and men's happiness levels.

During the first wave of the pandemic in April-May 2020, (36 per cent versus 33 per cent) with little change reported since. In the same period, 26 per cent of both sexes reported feeling "particularly tense". Similar proportions of women and...