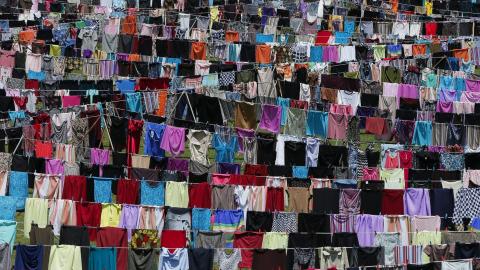 After the rape, the police sent him to the capital Pristina, where his ordeal continued. "Then I was seriously abused again, beaten up… I was praying to be killed rather than endure what was happening to me."

Luli's story is one of several rape survivors' accounts in a new book entitled 'Beyond Pain, Towards Courage: Stories about the Trauma of Wartime Sexual Violence', published in English, Albanian and Serbian by the Kosovo Rehabilitation Centre for Torture Victims and ForumZFD Kosovo.

The book is a powerful chronicle of rape, torture and trauma, as well as hope and courage, digging deep into the long-term consequences of wartime sexual violence.

Thousands of women are believed to have been victims of sexual violence inflicted by Serbian forces during the Kosovo war of 1998-99, which NATO brought to an end by terminating Yugoslav President Slobodan Milosevic's rule over what was then a Yugoslav province.

Feride Rushti, the head of the Kosovo Rehabilitation Centre for Torture Victims, which provides medical, legal and financial support to wartime rape survivors, told BIRN that the book includes the stories not only of women and girls, but also of men and boys in order to "deepen our understanding of the gender dynamics of the Kosovo war".

"Silence [about sexual assault during wartime] has been more pronounced among male survivors. Their damaged sense of pride… has been made them silent and doubled their suffering," Rushiti said.

The book examines how the survivors' suffering has affected them, their families and children for more than two decades, "because the consequences of such huge trauma are never limited to the victims of rape", Rushti explained.

"As was proven in other cases, in Kosovo as well, with victims...