BIRN Fact-Check: What Progress Has the Kosovo-Serbia Dialogue Made? 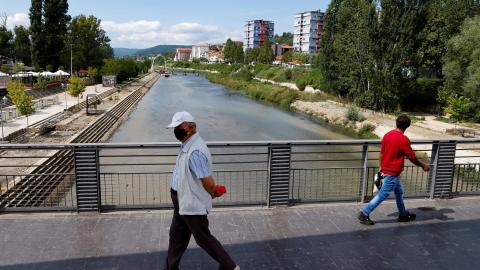 Since the Kosovo-Serbia dialogue was resumed in the wake of Kurti taking office as Kosovo's premier earlier this year, there have been no improvements in relations and been little or no progress in implementing agreements already made over the past decade of negotiations.

After Serbia lost control of Kosovo as a result of the 1998-99 war, its former southern province was administered by the UN until it declared its independence in 2008. Serbia has never recognised it, however.

Negotiations led to the so-called Brussels Agreement in 2013, which envisaged the establishment of an Association of Serb-Majority Municipalities to represent Serbs' interests in areas of Kosovo where they form the majority. But eight years after that, the idea remains on paper, the casualty of continuing political tensions between Pristina and Belgrade.

Association of Serb-Majority Municipalities: no progress

Graffiti depicting Serbia's national flag with a map of Kosovo in the Serb-dominated part of the ethnically divided town of Mitrovica. Photo: EPA-EFE/VALDRIN XHEMAJ.

The Association of Serb-Majority Municipalities, a planned self-governance association of municipalities with a Serb majority population in Kosovo, was ratified by the Kosovo Assembly in 2015.

But a Constitutional Court ruling the same year said that some of the points of the agreement to set up the Association did not fully comply with Kosovo's constitution and should be amended.

In the ongoing dialogue with Kosovo, Serbia has increasingly prioritised the establishment of the Association, arguing that it is necessary to protect Serbs' interests in the ethnic Albanian-majority country.

But some Kosovo politicians have argued that it would give Serb enclaves...