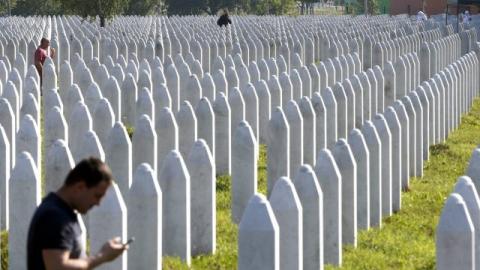 A report published on Wednesday by the Independent International Commission of Inquiry on the Sufferings of All Peoples in the Srebrenica Region between 1992 and 1995, which was set up by the government of Bosnia's Serb-dominated Republika Srpska, seeks to cast doubt on whether thousands of Bosniaks who were murdered by Bosnian Serb forces in July 1995 were innocent civilians.

The report also accuses the UN's International Criminal Tribunal for the Former Yugoslavia of staging politically-biased trials of Bosnian Serb political and military leaders, and of wrongly classifying the Srebrenica massacres as genocide.

The report says that its findings show that after Srebrenica fell to Bosnian Serb forces, the Bosniak-led Army of Bosnia and Herzegovina's 28th Division "formed a military column of more than 12,000 army members" and broke through Serb lines, heading for Bosniak-controlled territory.

"Attacks on this column [by the Bosnian Serb Army], which caused the death of approximately 4-5 thousand members of the ARBiH 28th Division, can be considered legitimate military actions," it says.

The Hague Tribunal found that more than 7,000 Bosniak men and boys were systematically killed by Bosnian Serb forces in a series of massacres after the fall of Srebrenica.

The commission's report accepts that several thousand Bosniaks were executed "in the most horrific way" and that "those responsible for these heinous crimes should be punished".

But it insists that the victims included "2,500-3,000 military prisoners" and only "several hundred male civilians".

The report says that the commission "does not have any doubts about the criminal nature of these killings", and describes them as a war crime.