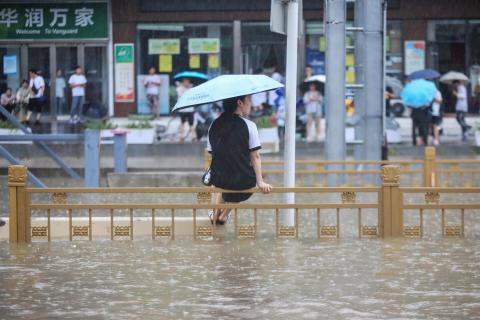 Large swathes of China's central Henan province were under water on July 20, with at least a dozen people dead in its capital Zhengzhou after the city was drenched by what weather watchers said was the heaviest rain in 1,000 years.

With more rain forecast across Henan for the next three days, the government of Zhengzhou, a city of over 12 million on the banks of the Yellow River, said 12 people were reported to have died in a flooded subway line, while more than 500 were pulled to safety.

Video on social media on July 20 showed commuters chest-deep in murky floodwaters on a train in the dark and an underground station turned into a large, churning pool.

"The water reached my chest," a survivor wrote on social media. "I was really scared, but the most terrifying thing was not the water, but the diminishing air supply in the carriage."

Due to the rain, the authorities halted bus services, as the vehicles are powered by electricity, said a Zhengzhou resident surnamed Guo, who spent the night at his office.

"That's why many people took the subway, and the tragedy happened," Guo told Reuters.

From the evening of Saturday until late on July 20, 617.1 millimetres (mm) of rain fell in Zhengzhou, about 650 km (400 miles) southwest of Beijing. That's almost on par with Zhengzhou's annual average of 640.8 mm.

The amount of rainfall in Zhengzhou witnessed over the three days was one seen only "once in a thousand years", local media cited meteorologists as saying.

The lives of millions of people in Henan, a province with a population of around 100 million, have been upended in an unusually active rainy season that has led to the rapid rise...