Giannis Antetokounmpo and the Bucks at the top of the NBA 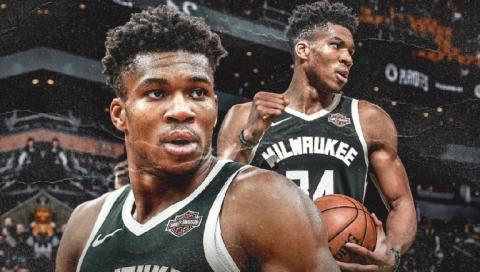 Giannis and the Bucks at the top of the NBA! The legendary Giannis Antetokounmpo made the whole of Greece proud, "terrorized" the Suns in the 6th final (50p, 12r, 2a), with the Bucks prevailing 105-98 and reaching the Promised Land after 50 whole years !

After an amazing performance, Giannis managed to be at the top of the world. The Bucks are living their own dream, the star of the team Giannis Antetokounbo is excited after the magnificent appearance.

The mythical Greek Freak, was once again "present" when the going got tough, and finished the match with 50 points, 13 rebounds, 2 assists and 5 blocks, leading the Bucks to the top of the NBA after 50 whole years !

17 points for Middleton, 16 for Portis and 12 for Holiday! Shocking Chris Paul for the Suns who finished the game with 26 points, 5 assists and 2 rebounds. On a bad night, Devin Booker finished with 19 points and 8/22 shots.

Both teams started the game nervously and with many mistakes, with the small score of the first minutes capturing 100% the image of the match. The Bucks, however, manned up, Giannis found his pace, Middleton got his gun and the Bucks began to build a difference from the beginning.

The Greek Freak did what he please under the hoop, while Middleton scored 7 consecutive points in the first 12 minutes , with the Suns on the other hand failing and Booker not finding some rhythm. The 29-16 and +13 of the Bucks in the first period of Game 6 seemed normal…

The Suns, however, found answers and in fact immediately. Initially they started building a series from the beginning and with a 10-0 they brought the match to -3. The Bucks were off target, the Suns went into the classic pick and roll with Paul and Eaton and soon got their heads in the game for the...