Kosovo PM Albin Kurti: ‘We would welcome a decision to recognise Kosovo’s independence’ 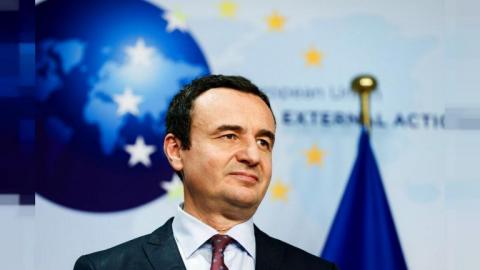 Greece's recognition of Kosovo's independence would be a proof that Athens is ready to play a leading regional role in the Balkans, says Kosovo's Prime Minister Albin Kurti in an exclusive interview with To Vima.

Prime Minister Kurti, who was in Athens recently for "The Economist Conference" and had a brief meeting with Greek Prime Minister Kyriakos Mitsotakis, is clearly against a territorial swap with Serbia and the redrawing of borders in the Balkans. He also stresses that the status of Kosovo has been permanently settled and the dialogue with Belgrade concerns only the future relationship between the two countries.

Kosovo went through an unstable political period with consecutive elections but it seems there is now a stable government. What are your main priorities both domestically and externally? How big a problem is corruption?

We have been focused on two basic and most urgent priorities. The first priority was focusing in managing the pandemic aiming to minimize consequences on the public health. As a result in the last 100 days due to appropriate measures against COVID -19, excellent response from the citizens and massive vaccination the number of new cases have dropped by 99%, the number of active cases by 97% and the number of the hospitalizations by 86%.

In addition our reforms in the justice system, fights against corruption and the preserving public funds have had a positive impact in increasing the citizen's trust towards public institutions. On the economic front in the first five months of this year we have recorded some very positive and promising results. Our economic activity has been increased by 15%, our budget revenues by 30%, exports by 66% and...