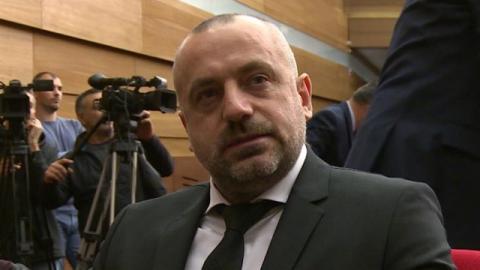 Members of the assembly of Srpska Lista, the Belgrade-backed Kosovo Serb party, on Tuesday re-elected Goran Rakic as president and Milan Radoicic as a party vice-president by unanimous decision. The assembly also elected Igor Simic and Dalibor Jevtic as vice-presidents.

Srpska Lista is the main Kosovo Serb party and is perceived as the arm in Kosovo of Serbian's ruling Progressive Party.

Radoicic, who is widely seen as the real power-holder in Serb-majority northern Kosovo, became vice-president of Srpska Lista in July 2018.

The indictment for the murder of Kosovo Serb opposition politician Oliver Ivanovic, filed in December 2019, said that Radoicic and another prominent Kosovo Serb, Zvonko Veselinovic, were leaders of the criminal group responsible for the killing, and accused several policemen of aiding the crime.

Radoicic, who fled to Serbia, has denied wrongdoing.

Not long before his death, Ivanovic claimed in an interview with BIRN that Radoicic was the key figure and real power-holder in the north of Kosovo, even though at that time Radoicic was not involved in politics.

In March 2021, the Pristina Basic Court withdrew the warrant for the arrest of Radoicic. The prosecution declined to comment on the reasons for this, saying only that "this is an internal issue".

Both Radoicic and Veselinovic, who have developed a strong business empire in the meantime, were under investigation by the Serbian police and state intelligence agency, BIA, which suspected them of smuggling drugs, weapons and oil, as well as money-laundering and loan sharking, the investigative website KRIK revealed.

Both also have high-profile political ties in both Serbia and Kosovo. In Serbia, they have numerous construction companies...