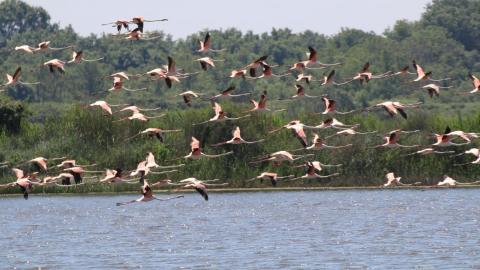 Flamingos in the abandoned salt plantations near Ulcinj, Montenegro. Photo: Center for the Protection and Study of Birds

"Land with a total area of ​​14.5 square kilometers [will be] permanent state property of Montenegro," Krivokapic posted on Twitter.

The salt pans were established in the 1920s and provided a good life for wokers and the birds that nested there. The whole area later belonged once to the state-owned salt company Bajo Sekulic, which was privatized in 2002.

After bankruptcy in 2012, the salt pans stopped pumping out fresh water and pumping in saltwater, and with it, food for the birds. That endangered the habitat of around 250 bird species, including numerous rare species such as the Dalmatian pelicans and flamingos as well as spoonbills.

In 2014, a plan was drawn up to convert almost 15 square kilometers of the ponds, channels and banks into a touristic development complex with hotels and golf courses.

The former government approved this plan but changed its mind after a dramatic intervention by the ambassadors of France, Germany and Poland who demanded the revival of the area's biodiversity, which requires the Ulcinj salt pans being put back into operation. They even said the issue could jeopardize the international reputation of Montenegro and its accession negotiations with the EU.

After months of pressure from the international community and environmental organisations, the National Parks and the board of trustees of the salt pans iun 2015 signed a one-year contract by which the state is obliged to...